With the daily news continuing to give us ample reminders of the turmoil, uncertainty, and challenges humanity is facing, the ability to access our fundamental capacity to care is more important than ever, as Thupten Jinpa—the longtime principal English translator for His Holiness the Dalai Lama, author, and founder of the Compassion Institute—often reminds us in his teachings.

In this short guided practice, filmed during a live session for the Awake Network community in May 2021, Jinpa leads us in first slowing down to feel grounded in the energy of our body, then generating the energy of care for a loved one, and finally extending that care to those who may be more distant, and to humanity at large.

We hope you find this practice helpful today, and that you’re able to incorporate it into your life going forward!

For those who may be inspired to explore more practices like this, and study deeply with Thupten Jinpa, we’d like to give a quick heads up that the next session for the two week training he created called Building Compassion from the Inside Out begins on August 30th, and there are still a few spots left! If you can’t make this one, stay tuned for announcements about cohorts beginning in October and November. Learn more and register here. 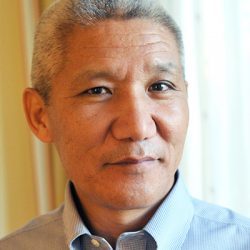 Thupten Jinpa, Ph.D. was trained as a monk at the Shartse College of Ganden Monastic University, South India, where he received the Geshe Lharam degree. Jinpa also holds a B.A. in philosophy and a Ph.D. in religious studies, both from Cambridge University.

Jinpa has been the principal English translator to H.H. the Dalai Lama since 1985, and has translated and collaborated on numerous books by the Dalai Lama including the New York Times Bestsellers Ethics for the New Millennium and The Art of Happiness, as well as Beyond Religion: Ethics for a Whole World. His own publications include A Fearless Heart: How the Courage to be Compassionate Can Transform Our Lives and translations of major Tibetan works featured in The Library of Tibetan Classics series. Jinpa is the principal author of Compassion Cultivation Training™ (CCT©) developed while at Stanford University in 2009.

A frequent speaker at various international conferences on mindfulness, compassion, and contemplative practice, Jinpa serves as an adjunct professor at the Faculty of Religious Studies at McGill University, Montreal and is the founder and president of the Institute of Tibetan Classics. He has been a core member of the Mind and Life Institute and its Chairman of the Board since January 2012.